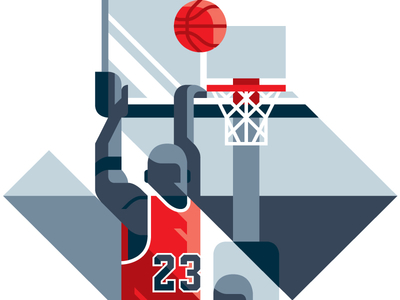 With LeBron James’s otherworldly performance through much of this year’s playoffs, the old, somewhat ridiculous, question has re-emerged as to who is the greatest of all time? While the LeBron camp has its share of passionate supporters, the average well informed basketball fan will still align themselves with Michael Jordan.

As for me, while I’m not the crazed call-into-Sports Radio fan, I find myself rooting for LeBron in ways that I never remember doing so for MJ. While Jordan will most probably go down as one of the two or three most dominant athletes of all time, it’s hard for me to feel fondly towards someone who, quite simply, seems like a jerk. Yelling and demeaning teammates, holding lifelong grudges for slights that were often of his own concoction, elevating himself even at the expense of his own children, competitiveness and intensity at all costs, all managed to paint a picture of a somewhat unlikable man. While LeBron certainly has an ego and is often unnecessarily profane for someone who knows that he’s a model for kids and adults alike, he seems by all accounts to be a decent human being who is a good father, cares deeply about the community and seeks to heap praise upon both teammates and opponents.

This debate and others like it ignite a question that would seem to have some baring for our lives and for our life decisions. Namely, can one can achieve greatness while still maintaining genuine humility, decency and balance. A quick perusal of the world of sports would seem to bring one to the conclusion that for every Wayne Gretzky, a gentle soul who spent the last days of his career signing hockey sticks for even the most insignificant employee of the NY Rangers, there are a dozen Tiger Woods who in his prime became the greatest, due in no small measure to a nasty demeanor and an almost unhealthy competitiveness. What’s true in sports seems to be undoubtedly true in business, law, the arts, entertainment, academia etc. One might draw the conclusion that reaching the pinnacle of any given profession or enterprise requires a single mindedness, an intensity, an obsessiveness that often stands in conflict with healthiness, balance, spiritual fitness and a robust family and personal life.

Is It Worth It?

Perhaps what’s an open question is whether it’s worth it. Whether it’s worth the effort, work and single mindedness that would allow a person to leave their mark on the world in some public and significant way. I saw an excellent movie called Whiplash a couple years back about a music teacher and his pupil. The relationship was incredibly unhealthy, even abusive, and the teacher played by J.K Simmons was manipulative at best and maniacal at worst. With that said, at the end of the day his student became a world class Jazz drummer. What I found provocative was that when one walked out of the theater it wasn’t clear the position that the movie was taking of whether all of it was worth it or not. Maybe that’s the price that one pays, and the world can only meaningfully exist with accomplishment and creativity even at the expense of other values.

We live in a country in which typically students are coddled and given the easy way out. Parents don’t want to push too hard in fear of alienating their kids or putting too much pressure on them. The mentality in China seems to be just the opposite, and while the suicide rate and stress levels among Asian college students are far higher than that of their American counterparts, it’s no wonder that China has far surpassed the US in regards to education and professional development. Again, is that trade- off worth it? How does a parent or an educational institution manage to firmly and forcefully drive their children or students to success while also developing well rounded and healthy/ happy members of society.

As a Rabbi, it strikes me that the ancient Jewish texts are sensitive to this issue and seek to strike a necessary balance. On the one hand, the Bible and Talmud see no value in laziness and strongly critique an inferior work ethic. Pushing oneself to achievement, becoming scholarly, making a difference in the world are all part of a child’s vocabulary from a young age. There is a recognition that happiness comes specifically because of achievement and that the greatest tragedy is allowing one’s G-d given abilities to lie fallow. On the other hand our sages make it clear that accomplishment means nothing if it’s not in the context and framework of gentleness, benevolence, modesty, humility, generosity of spirit, a calm demeanor and a concern for the greater welfare.

It would seem obvious that at the core of this issue is the question of the inner life of any given individual. If a person is spiritually, psychologically and emotionally fit then a desire for success comes from a solid place of healthy self-actualization. Such a person is not running from something, righting old wrongs, defining themselves through other people’s version of success, trying to endlessly meet someone else’s expectations and filling a void that can never ever be artificially filled. On the flip side, if a person’s inner core is not developed then they just run and push and seek to accomplish and claw their way to success only to realize at the end of the journey, that they are standing quite alone and unfulfilled at the top of the pinnacle.

As a parent and educator that means high standards, limits and boundaries all communicated in a spirit of love and ultimately acceptance. As a person navigating one’s own life it means constantly investing in the time and the resources to make sure that our inner world is where it needs to be in order to meaningfully enjoy whatever success our efforts render. Hats off to Michael Jordan and his ilk for being the greatest of all time, but for me, and hopefully for healthy people around the world, I’ll look for role models elsewhere.

What do you think?

If you enjoyed reading this article, please download the VoxPopApp and select Sports or Society or any other topic you care about. On occasion, please respond to a quick 10 second anonymous survey, and make it count. We really want to hear your voice. Thank you!